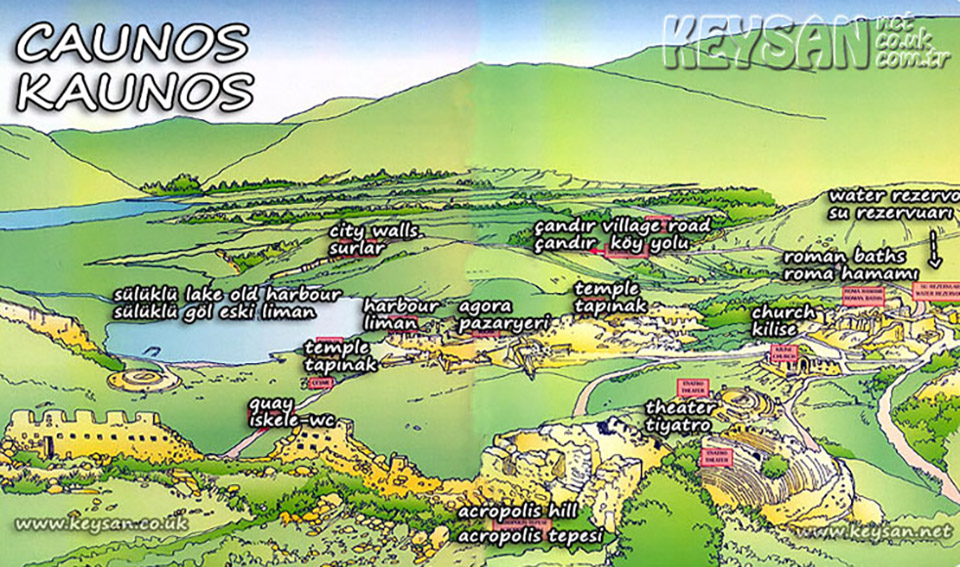 Caunus is situated on the western bank of the Dalyan (Calbis) River, which connects Lake Köycegiz to the Mediterranean. It lies within the present day boundaries of Candir Village which is opposite the town of Dalyan. Once a harbor city, the city of Caunus is today at quite a distance from the sea.

The city was founded upon a peninsula which extends towards the sea like a tongue, formed by the 152 m high acropolis hill and the 50 m high lesser acropolis to the southwest. During the Archaic and Early Classical Ages, the city was situated within the cavity between the fortification walls running over the ridges of the Acropolis and the lesser Acropolis and the fortification walls which extend behind the Fountain Building in the Agora.

The area occupied by the Stoa today must have been used for religious buildings from the beginning of the 5th century BC. The city obviously spread over the saddle connecting both the greater and the lesser acropolis to the Sivrihisar and Balýklar hills. This expansion occured, at the earliest during the Hecatomnid period. By then, the city of Caunus began to be built on terraces. In subsequent periods, while the earlier terraces were repaired, new larger terraces were also constructed. The natural flat areas upon which the Agora and the Stoa were built extends over a narrow band along the edge of the harbor.

Until the end of 1940s, Dalyan and the surrounding area was subject to malaria. The struggle with the mosquitoes during these years eradicated malaria in Dalyan. Dalyan suffered from malaria throughout its history. The reason why the people of Caunus had almost a "greenish complexion" enough to cause them to be described as "unhealty" was due to malaria. This pain and suffering is known from a story attributed to Stratonikos, a master of the harp during the Hellenistic Age: when Stratonikos saw the "green faced" people walking the streets of Caunus, he expressed his idea by remarking, "As are the generations of leaves, so are the generations of men". When the inhabitants of the city complained that they were insulted, he responded: "...how could I dare to call a city unhealthy, where even the dead men walk the streets?..."Strabon xiv, 651.3

Do you like legends ? If you like, you will be upset, after hearing the legends that we will tell you.

The king of the Caria, Malletos, who is the son of Apollo had twices. The boy twice is given the name 'Caunos', and the name of the girl baby is 'Byblis'. The twice grew up together and they fell in love with eachother. Secret love reveal when they had a baby. The king was very raged and he expelled his son from the country.

After expulsion Caunos founded a city near the boundary of Lidya. The new city is opposite the town which called 'Dalyan' today.

What did happened to Byblis? This is the sad part of legend. The King humiliated Byblis and she didn`t bear the pain of leaving from her lover. She cried cried, her tear rivers dried. Eventually, she threw herself from a hill and died. According to legend, Dalyan Canals that remind labirents was formed by the tears of Byblis.

The Roman historian and poet Ovidius told the story differently.Accoding to Azra Erhat who tell the story to us from Ovidus, legend about the foundation of Caunos is like this: Byblis fell in love with Caunos. Byblis wrote a letter to Caunos and told her feelings in her letter. Kaunos reaction was very dissappointing for her and he refused her with hate and anger. The Caunos didn`t want to see Byblis again and left the country with his friends. He came to Caunos and founded the city that called with his name. As for Byblis, she wanted to die because of Caunos`s disappointing reaction to her love. She threw herself from a high hill but water fairies (Nympies) rescued her and reverted her to a river. The tears of Byblis formed the river and still that day, tears of her is splashing...
That is the sad foundation story of Caunos..

If did you want the visit Caunos city, you have firstly crossing the river with by rowboat at the end of the Dalyan harbour, and after than about ten minutes walking to the city. Also, in Dalyan if you book a daily boot trip,you will be have a short time for visit the Caunos city.